On November 25, 2014 the USEPA (EPA) proposed to lower the primary and secondary national ambient air quality standards (NAAQS) for ground-level ozone (the main component of smog).  The proposed revision was published in the Federal Register on December 17, 2014, and comments were accepted through March 17, 2015.  The final rule will be issued by October 1, 2015.

Primary NAAQS establish pollutant concentrations intended to protect public health with an “adequate margin of safety,” as required by the Clean Air Act.  Secondary NAAQS are set to protect the public welfare (such as trees, plants and ecosystems) from “any known or anticipated adverse effects.”  In accordance with the Clean Air Act, the EPA is required to review the NAAQS every 5 years to determine whether the standards remain “requisite to protect public health” (i.e., neither more or less stringent than necessary).  The primary and secondary ozone NAAQS were last set in 2008, when the 75 ppb, 8-hour standard became effective.

The EPA proposed that the current primary ozone NAAQS of 75 ppb is no longer sufficient to protect public health with an adequate margin of safety and should be lowered into the range of 65 to 70 ppb.  The averaging time and form of the standard will remain the same, with compliance demonstrated when the fourth-highest daily maximum 8-hour ozone concentration per year, averaged over 3 years, is less than or equal to the level of the standard.  The EPA accepted comments on setting the standard as low as 60 ppb, as well as retaining the current standard of 75 ppb.  Likewise, the EPA proposed that the current secondary ozone NAAQS is no longer sufficient to protect public welfare and should be revised to between 13 and 17 ppm-hrs, as defined in terms of seasonal index W126, which is equivalent to between 65 to 70 ppb.  The EPA accepted comments on defining the level of protection as low as 7 to 13 ppm-hrs, as well as retaining the existing standard.

Based on the three-year average of monitoring data collected in 2011 through 2013, 358 counties (shown on the map below) would violate the NAAQS if lowered to 70 ppb and 200 additional counties (558 counties, total) would violate the NAAQS if lowered to 65 ppb.  (Please note:  This includes calendar year 2012 data which reflects increased ozone formation due to above-average temperatures and below-average humidity in central and eastern parts of the country.  The final attainment designations will be based on monitoring data from the three-year period of 2014 through 2016, and it is possible that some of the counties that are projected to be in violation of the new standard will actually be in attainment.) 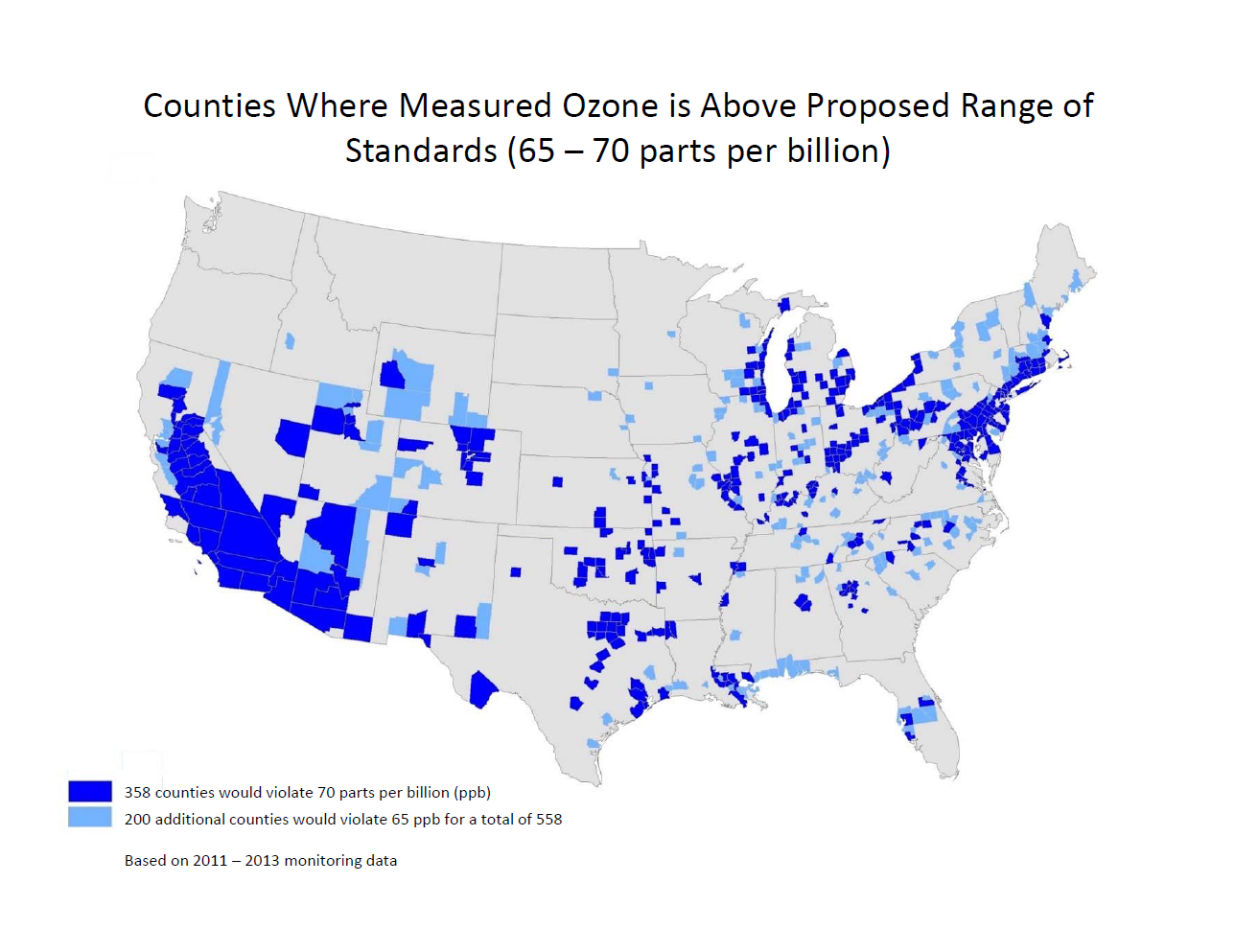 If a county is designated as nonattainment, new major sources or existing major sources planning to make a major modification in that area will become subject to nonattainment new source review (NNSR) considerations for ozone.  There are many challenges associated with NNSR permitting including evaluation and implementation of lowest available emission rate (LAER).  With LAER, the highest level of control is required without regard to cost.  In addition, facilities are required to achieve a net reduction of the nonattainment pollutant emissions by obtaining emission offsets.  Offsets can be expensive due to high demand and limited quantity.  Facilities which have preconstruction permit applications well under the review process will be grandfathered at the time the final standard is issued.

The current timeline for EPA issuing a final regulation either leaving the NAAQS at the current standard or lowering the value, as well as all associated activities, is as follows:

On March 17, 2015, the U.S. Senate and the House of Representatives introduced bills to block the proposed changes to the ozone NAAQS based largely on economic concerns.  The bills, presented by senators Joe Manchin (D-WV) and John Thune (R-SD) and Representatives Pete Olson (R-TX) and Robert E. Latta (R-OH)  would prevent the EPA from lowering the standard until at least 85% of U.S. counties that are currently not in attainment with the 2008 standard attain the 75 ppb ground-level ozone concentration level.  It is unclear what effect these bills may have, considering the Supreme Court’s 2001 affirmation in Whitman v. American Trucking Associations, Inc. that the Clean Air Act “unambiguously bars cost considerations from the NAAQS setting process.”  However the bills help to focus attention on the importance of economic costs when the EPA and states work to implement new air quality standards.  CEC will follow how the proposed bills will impact EPA’s deadline to finalize the rule as well as any impacts on the final standards set in the final rule.

If you have any questions about the proposed changes to the ground-level ozone NAAQS and their implications to your facility, please contact either Amy Ritts (aritts@cecinc.com; 888-598-6808). More information on the proposed standards is available at http://www.epa.gov/glo/actions.html.