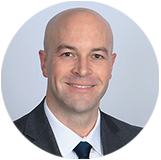 CEC is pleased to announce that Aaron Henry, P.E., Principal, has moved into the role of Office Lead for CEC Knoxville. Aaron started in his new role on March 1, taking over for James Tomiczek, P.E.

James had been in the role since 2014 when CEC acquired his firm, VISION Engineering & Development Services. He will continue in a leadership capacity at CEC as a vice president while working with Aaron on a seamless transition into the office lead role. We thank James for his many years of leadership and service to the office.

Aaron has more than 10 years of experience working with the structural and civil engineering practices. Starting at CEC in 2015, Aaron has worked on projects across all market groups and for most of the CEC offices. Aaron is a licensed Professional Engineer in six states and serves on the board of the Tennessee Structural Engineers Association. He grew up in the Knoxville area and now lives there with his wife and three daughters. Aaron is active in the community and is excited about this opportunity and the continued growth of the Knoxville office.

In 2014, CEC established operations in East Tennessee through the acquisition of Knoxville-based VISION Engineering & Development Services, Inc. After that, we quickly expanded our services to include environmental engineering, ecological services, and air testing. Our structural engineering group provides support to all of CEC’s offices, which gives us a unique connection to the corporate body. In December 2016, CEC Knoxville became the first private tenant in the University of Tennessee’s Innovation Campus and Research Park at Cherokee Farm.