In the summer of 1998, Kenn Whittier, a Senior Designer from our Austin office, was introduced to beep baseball, a form of the sport that’s much different from what people are used to seeing. Nearly all the players in beep baseball are blind or visually impaired, the bases are four-foot-tall buzzing foam columns, and almost all the players wear blindfolds. Kenn says he was instantly intrigued by how the game worked and ever since he saw it being played, he was “hooked.”

Beep baseball is played with equipment that provides players with audio cues. As the name suggests, the baseball beeps. The ball is bigger than a regular baseball, about one pound and 16 inches around according to Kenn. There are only two bases, first and third, that stop buzzing when they are tackled. The only players with functional vision are the pitcher and the catcher who are on the same team as the batter. If a player picks up the ball before the batter touches the base, the batter is out.  Each game only has six innings.

Kenn says the game of beep baseball is “a physically punishing sport” and “hard on the body.” “When the ball is hit out into the field, it comes out pretty hard. These players are listening for the ball, moving to intercept it, then they lay down on the ground and let the ball hit them in the body,” says Kenn. He goes on to explain that to score most people will “bear hug and tackle” the foam column and “go rolling to the ground. For most players, for every ball that’s hit, there’s contact one way or another, either with the ground, with the ball, with the base,” says Kenn. He says the players take it very seriously. “It’s very competitive.”

There are around 26 active teams throughout the country that are part of the National Beep Baseball Association (NBBA). Kenn is a part of the Austin Blackhawks, nine-time NBBA World Series champions. Kenn says the only rule for who can join is they must be mature enough for the game. The Blackhawks have had a player as young as 11, and their oldest player currently is 60 years old. For the team, the season runs from about April to November when they put on a final fundraiser tournament with all the proceeds going to support breast cancer awareness.

Kenn started as the catcher for the team, but his primary role now is as an assistant coach. However, he points out all volunteers wear many different hats, such as drivers, waiters, event coordinators, ball boys, equipment repairmen, and more. “You name it; we do it,” says Kenn. “Whatever it takes.”

The Austin Blackhawks have now helped beep baseball become a global sport. They went to Taiwan in 2000 to teach people how to play, and there are now five active teams in the country. They also went to the Dominican Republic in 2014 to help them start their team. Kenn has been with the team for almost 25 years, and he doesn’t plan on quitting anytime soon. He says, “As long as I’m physically able, I’ll be involved. And even beyond that, I will donate money and time. It’s probably a lifelong commitment for me.” 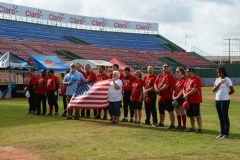 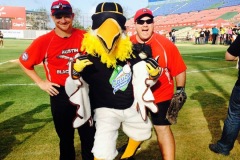 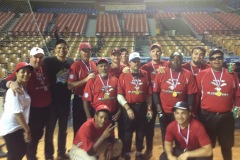 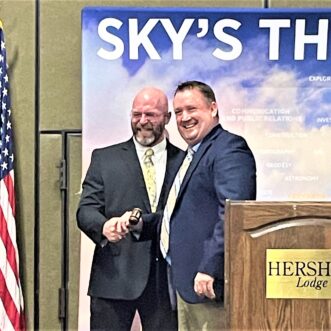 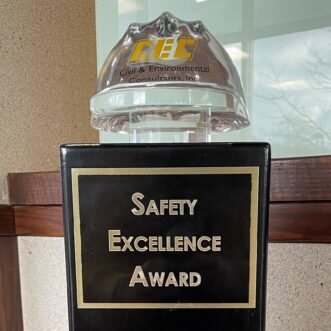